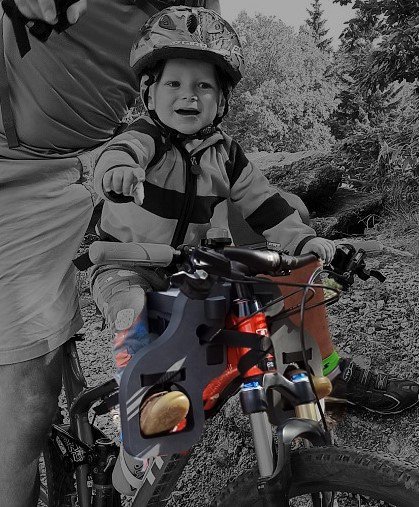 FlixFlox is also a foam children's bike seat, developed by a father - an enthusiastic cyclist, for his son, when he could not get a seat according to his requirements. He wanted a seat on which they would enjoy riding together in the field, the squirrel will be securely fastened, which will minimally affect the riding characteristics of the bike and does not require complicated assembly, so even a mother without dad's tools can do it. He opted for his own foam seat between the rider and the handlebars.

The FlixFlox seat is designed for stable children with a height of 70 cm up to 115 cm and a weight of up to 16 kg. This corresponds to an age of about 1.5 to 4 years. One of the uniqueness of this seat is the three-point belt, which the child attaches to the seat and which ensures greater safety and stability for the child. The legs protect the stirrups from being pushed into the front wheel and the child holds the handlebars with his hands, so he immediately trains the grip and control of the bike (don't worry, he won't "wash" you), which will come in handy as soon as he starts riding the bike. You can easily communicate with your child while driving, without having to look back and forth, so you're always in sight. Children are excited to see the changing landscape, and not just the parents' buttocks or backs. The FlixFlox seat is designed so as not to restrict the rider. The seat itself weighs only 490 grams and is one of the lightest on the market.

Bike is available to reserve.